Kubu Island, or Lekhubu Island, is located in the South-West of the Sua Pan in Botswana, on its side the Sua, or Sowa, Pan is part of the Makgadikgadi Pans complex, that altogether cover an area of ​​16,058 sq. Km, the largest complex of salinas in the world.

This is the most popular island of the whole pans complex and, unlike other islands, that are dunes of petrified sand, Kubu Island is made up of a granite outcrop, as well as Kukome Island, that is also in the Sua Pan.

This once was an island emerging from the great Lake Makgadikgadi, that in prehistoric times stretched for about 80,000 sq. Km in the basin of Kalahari; the signs of erosion by the lake's waters on its rocks are still visible.

In the Setswana language "Kubu" means "hippopotamus", probably the name dates back to the time when the great lake, that was supposedly inhabited by hippos, was present; but the true name of the island is Lekhubu, that derives from Lekhubung, that, always in Setswana, means "rocky ridge".

The island is in fact made up of a granite outcrop or kopje about 1 km long and 10 meters high; its slopes, in some points, appear to be terraced, here there are many rounded pebbles, that were shaped by the movement of the waves of the lake in the past.

On Kubu Island there are several twisted baobab that are estimated to be 3,000 or 4,000 years old; they are impressive not only for their size but also because they seem to have so much to tell about the history of this island.

Some scholars have found that these baobabs have had a huge growth over a certain period of their life, some 1,500 years ago, this suggests that, despite the Makgadikgadi Lake has dried up 10,000 years ago, at that time there was water again; subsequently, these marvellous giants have slowed down their growth, due to the lack of water.

Kubu Island is surrounded by the unlimited white expanse of salt of the Sua Pan, on sunny days the blue sky seems infinite and the pan is of almost blinding white, while, when the sun sets over the pan, the warm light illuminates the island and its majestic baobabs; at night, when the moon shines in the sky, the white of the expanse of salt reflects so much its light that there are shadows as if there was the sun, a surreal atmosphere.

Many rocks of Kubu Island seem white, in fact they are covered with fossil guano, this shows that in the past, when there was the Makgadikgadi Lake, this island was used by herons and other aquatic birds as a nesting place.

On the island, in the North, Stone Age tools and objects made with ostrich eggshell and crockery were found; it is believed that the island was inhabited in ancient times when the lake was still present, but some of these objects belong to a more recent era, some of them may have been taken to the island as gifts as the island is considered sacred, some state that even today the locals bring gifts to this place to propitiate the rain.

Not far from these finds, to the North, there are some boulders rounded by erosion by the water of the prehistoric lake; these boulders lean towards the immense salty expanse and are scenographic.

Also on Kubu Island, on the Southern part of it, there is a rounded, stone wall dating to the period from the 15th to the 17th century, many think it was built by the Great Zimbabwe Kingdom and that Kubu Island was the most Southern point of their empire; others believe that it was built by the Butua Kingdom; near the wall there are several statues made with stones depicting a man (cairn).

However, all are in agreement that this building was most likely the place where ritual circumcision took place for the transition to the adult phase, and this is supported by the various constructions made with stones and depicting a human figure, that probably have been realized as lucky charm.

Even today, teenagers in the nearby village of Tshwagong come here when they are 16 years old to make a sort of spiritual retreat, they try to get in touch with God, sing a song and leave bidding on the ground; the inhabitants of this village consider the island of Kubu and Thithaba as sacred.

Even Kubu Island, like the Baobabs of Baines, was portrayed in one of the explorer Thomas Baines's paintings.

Kubu Island has been declared a national monument and is one of the most well-known destinations in the Makgadikgadi Pans. There is only one camping site with a few pitches and it is necessary to book in order to stop here, and you must carry all you need.

We spent two days at Kubu Island, read here what to do in one day spent here.

However, it is not very prudent to go to these two islands without perfectly knowing the soil conditions; it is possible that even during the dry season, beneath the salt surface is hidden some ground not perfectly dried after the rains, the risk is to remain muddled with your car. 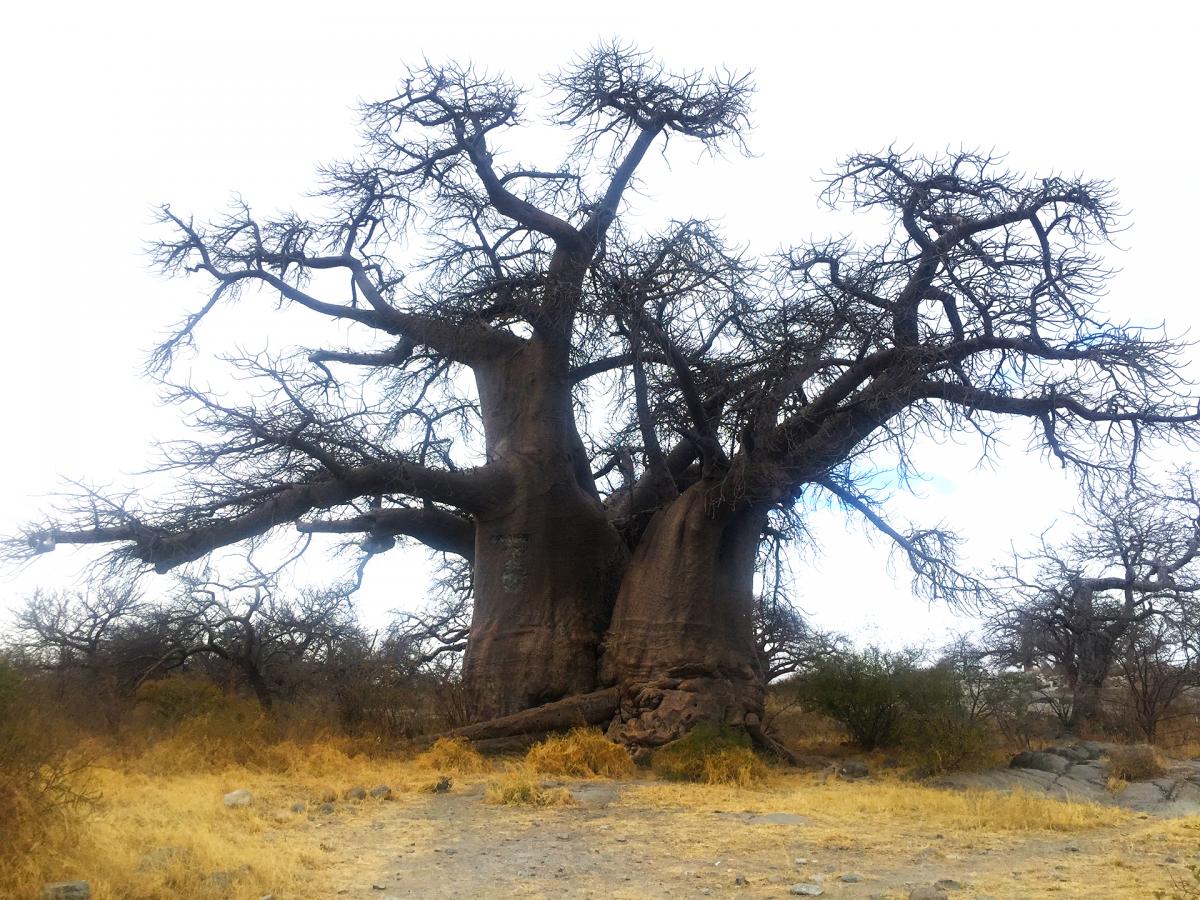